Better to Ask Me Who I Was 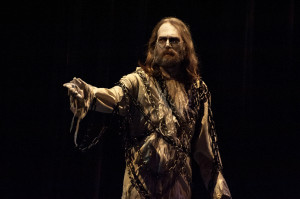 The Author as Jacob Marley

If you follow my blog you may be aware that I recently embarked on a new adventure called musical theater.  Like most of my adventures that I stumble into it began when my children asked me, “Can we Daddy?  Please!”  The back story of how I initially became involved in community theater can be found here. This time however I signed up for this on my own and would be tackling a much more prominent role in our local community theater production of Scrooge the Musical.

As I prepared for my audition for Scrooge, I struggled with what I would say and sing. I had never auditioned for anything before and had no idea what to expect. I don’t even remember what dialogue I chose to recite and the song I eventually settled on was “It’s a Small World” because it was short, familiar, and I knew all the words. I went into my audition confident that no matter how terrible I did I would still get the background part I was aiming for because they needed all they could get and there are very few men involved in community theater.

The managing director and accompanist were running the auditions and as I expected I completely bombed mine. But the director got up and ran me through a bit of conversational dialogue with him to see how I would do. I listened to his instructions and did my best. He thanked me for my time and I for his and I walked out wondering if I had actually missed what should have been a sure thing. But at least I could teach my children a lesson in handling rejection as I prepared them for the possibility they would be doing the show without their father. 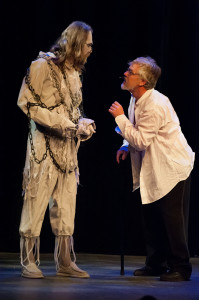 Marley and Scrooge Face Off

A couple of weeks later my wife and kids went to the theater to check the posted list of roles to see what my children had landed while I stayed home and played video games. A few minutes later I got a call on my wife’s phone and when I answered it was my oldest daughter on the other line. She was obviously excited and exclaimed “Daddy! You got a named part! You got Jacob Marley!” My immediate response was “Wasn’t that Goofy’s role in Mickey’s Christmas Carol?” As I fully absorbed what she had said I began to wonder just how big of a role I had landed and what qualities I had displayed for them to give it to me. A quick search through YouTube for the scenes with Marley in the musical gave me some idea of the answer to my first question.

As for the second question, I never got the chance to follow up with the accompanist or director to ask and I didn’t feel it was right to question their judgement so I can only speculate. When rehearsing for Chitty Chitty Bang Bang I naturally sang the bass parts.  During rehearsal the accompanist would play the different parts for the different voice groups so we could rehearse in our individual groups to clearly hear the melody and each other.  Then she would play the entire piece and we would all sing together in a reasonable approximation of harmony.  However when she said “Now I’ll play the lower part” what she played didn’t match was I was reading in the bass clef.

During a break in rehearsal I went up to her and asked about it and she said that she hadn’t actually played the bass part, just the lower treble part.  There are not a lot of men in community theater, and fewer still with a bass voice so she usually stuck with the treble clef.  She played through the bass for me so I could hear the melody and then commented that a walk-on community theater volunteer who can read music is a rarity.  I explained to her that I learned to read music as a child and improved upon that in middle school and it stuck with me.  Probably because musical notation is just another type of programming language.  We hit it off and I ended up having follow up conversations with her and told her about the Amiga MOD format as another type of musical notation. Also during this time period I got to know the managing director of the theater company and we developed a rapport of our own. 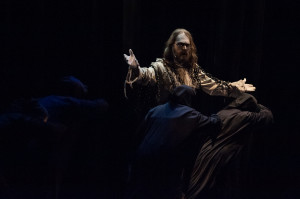 Marley and his Phantoms

As you can see from the pictures I am tall and scary looking and my singing voice is deep. The solo that I was tasked with was a complicated vamp with both time and key changes. I realized I physically matched well with the role and my musical knowledge would be an asset in pulling off the solo. They certainly took a leap of faith with me and I was determined to pull it off as best I could not just for my children but for them as well. I practiced the solo often by programming the accompaniment into a MIDI file and loading it into my phone so I could sing along while doing things around the house. The dialogue was more of a struggle, made even more difficult by the fact that the man who played Scrooge had been doing it for years and wasn’t prone to following the script to the letter.

I adapted as best I could but we only got to rehearse my scene a couple of times and when we did most of the focus was on choreographing the movement of the phantoms. I would do my best to lead them in the song as they were my chorus and stay out of their way. At first I tried to play the role woefully like I had seen in the YouTube videos and the stage directions commanded but it required a subtlety I did not possess. However the director coached me into playing the role as more of an angry spirit returning with a dreadful warning which I think worked better for both me and our modern times. In Victorian England purgatory was a place where you spent eternity suffering for the sins you committed on earth while in today’s media Hell is a place you come back from to exact glorious revenge on those who sent you there. 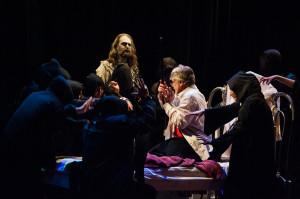 Marley and Phantoms Deliver Their Message

The first time we put it all together in full costume was the second day of tech week, the day before our first run through in front of an audience. But with the professionalism and experience of the actor playing Scrooge, the presence of my phantoms flowing around me and the addition of a scary voice effect for myself from the sound crew my confidence began to build. With additional encouragement and coaching from the rest of the cast and crew I found a groove that worked for me and my uncertainty became enjoyment.

Every time I strode on stage I gave the role everything I had, bringing a little something extra that I had found in the last performance. Scrooge and I discussed the scene between performances, adding or changing things as we thought of or stumbled into them and making improvements as we went. According to the cast, crew and director and a few in the audience who were NOT all related to me in some fashion, although admittedly most of them were, I totally and utterly KILLED on stage.  But I think the highest compliment I received was when my children’s choir teacher made the observation, “Wow!  Computer nerd’s got some stagecraft!” 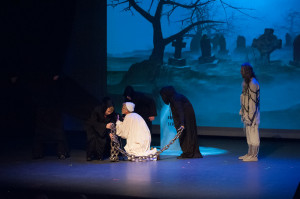 A Final Visit from Marley

I think the only time I nailed the entire scene and song was the Saturday night performance. But in the process I learned that close is usually good enough and not to sweat the small stuff. The audience only sees the performance they came to see. They have not read the script or heard the song. As long as you don’t own up to the mistakes on stage they’ll probably never know. Life and even parenting is a lot like that. This is different from engineering where letting a mistake through can mean people die in bunches. But we don’t engineer our lives, we live them, and they are full of performances that are riddled with mistakes. Some of our mistakes are big to be sure, perhaps even show stoppers. But like the key I sang in most of them are minor and the only thing worth carrying forward about them is the lessons that we learn. What you gain more than anything is the memories that you cherish. They give you the will and the strength to tackle each new challenge and adventure to come your way.

At the end of it all I received an ovation from the cast and crew and I took a bow I’d never imagined I’d take. They told me I owned the role and invited me to reprise it next year. I am looking forward to it and possibly more roles, to perhaps be the Christopher Walken of our local community theater.

I have been to purgatory and I return with this dreadful warning: If you want this role, MY role, you are going to have to come and take it. 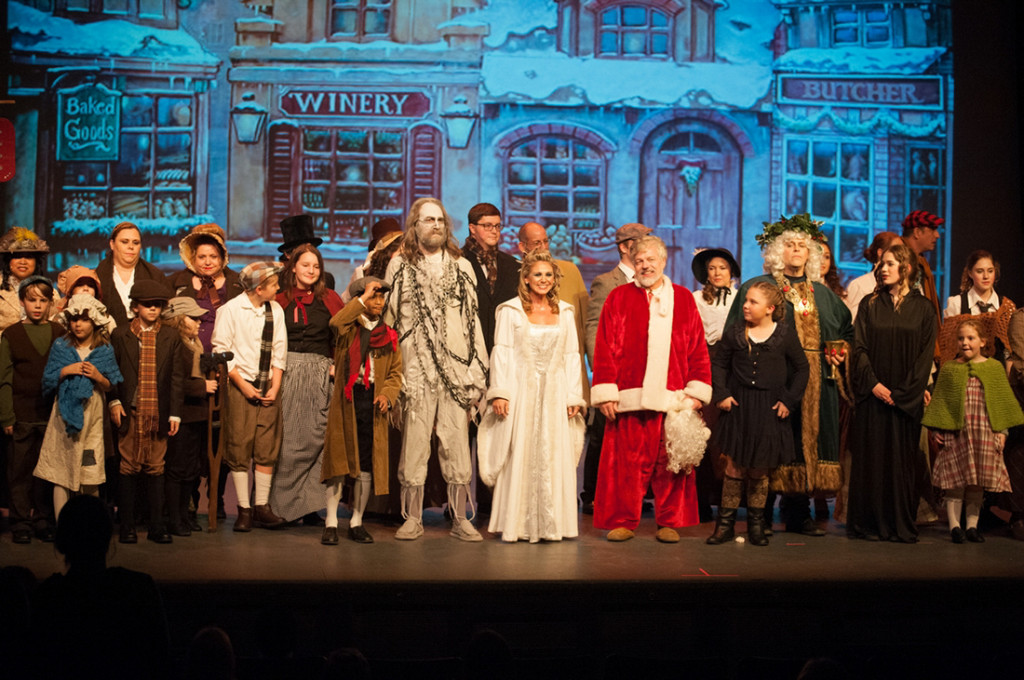 The Cast of Scrooge

One comment on “Better to Ask Me Who I Was”